Mady + Brett’s big day is vintage perfection! We love the fresh color palette and organic feel of the fabulous florals. Cheers to Mady and Brett, be sure to read their sweet story below:

The first time Mady and Brett laid eyes on one another, there was an instant connection. Mady was attending the University of Oklahoma when her friends introduced her to Brett who played football at the University of Tulsa. One day after they met, Brett asked her out on a date. So began their love story.

For their first date, Brett planned a romantic picnic at Lake Thunderbird after they watched a movie. The outgoing Brett says he was blown away by Mady’s beauty and as he got to know her, he could tell she was unique. Shy Mady thought it was charming that Brett courted her in an old-fashioned kind of way. She could tell he really respected her and that was something she had always hoped for in a man.

After a few months of dating, it became clear that the couple had the perfect balance between their personalities. Extraverted Brett was always the one inviting the timid Mady to the dance floor. Mady would always add a dash of sweetness to Brett’s stubborn tendencies. They were completely in sync.

Three years after the couple started dating on a rainy Thursday evening, Brett asked Mady to join him at the lake. There, he had arranged for the same setting as their first date. He even brought all of the same food and used the same basket he had used on their initial outing. After they dined, Brett asked Mady to marry him. Overcome with joy, she enthusiastically said yes.

To top off the surprise engagement, Brett invited their families and closest friends to welcome the newly engaged couple at their home. They spent the night celebrating with the people that mattered the most to them.

The first thing on their wedding checklist was selecting the perfect venue. Mady has always enjoyed antiquing and adding her special flair to furniture. It was important to her that their wedding day reflects who she and Brett are. One Tulsa venue has just the kind of character she was looking for – the Dresser Mansion.

The vintage charm evoked from the Dresser Mansion as well as the historical Tulsa neighborhood it resides in called to Mady’s heart. Built in 1919, the mansion is essentially unchanged since its construction. The couple decided this was to be the setting for the beginning of the rest of their lives.

While planning their wedding, Mady was interning at Poppy Lane Design, the Oklahoma City-based floral design boutique. Because of that connection, Mady calls the rest of the planning a breeze as they enlisted the help of brilliant vendors suggested by the Poppy Lane team, including Lindsay Gibson of Gibson Events.

Mady knew from the beginning that she wanted the look and feel of their special day to have a fresh, free-flowing feel to it. When she began looking for her dress, she wanted to see that organic pattern. Anthropologie’s wedding shop, BHLDN, had just the gown she sought. Her father treated Mady, her mother and sister on a Chicago trip to find the perfect frock and they found just that in a gown that featured a sweetheart neckline and delicate flutters of fabric toward the bottom that resembled soft petals.

On the morning of their wedding, the couple admits they were ready to be declared as “Mr.” and “Mrs.” They began their day with the rehearsal early that morning at the mansion. When they laid eyes on one another, those same old feelings came rushing back and they were gushing with excitement.

Brett and his groomsmen relaxed all day as they got ready, while Mady and her bridesmaids enjoyed a bridal luncheon before getting primped. She and her maids basked in all of the excitement. They lounged around watching movies in the mansion’s turquoise-themed room on an oversized iron bed.

Throughout the bright spring day, Mady and her bridesmaids excitedly watched from their room overlooking the courtyard where the nuptials were to take place. The bride made a point to take in each moment and she especially enjoyed watching the courtyard bustle with vendors and soon after, guests. It was all getting real. Now, she was ready to see her future husband.

Before the ceremony, Mady and Brett exchanged gifts and opted not to see each other before the walk down the aisle. They wanted that moment to be special.

When Mady began the walk down the aisle clutching her father’s arm and her oversized bouquet bursting with peonies in colorful hues, Brett recalls his breath being taken away. As Mady got closer to Brett standing under a dramatic archway dripping with wildflowers and garland, his smile only grew. Both were elated, ready to become husband and wife.

Following the ceremony, the couple enjoyed a brief time alone dining on plates catered by Abbey Road Catering. Both ate their delicious dinner quickly as they were ready to mingle with their loved ones, but savored the quiet, relaxing meal.

Upon being announced at the reception, the couple took in what was in front of them. The Poppy Lane team successfully delivered on the floral design at the natural-looking wedding. The interior of the Dresser Mansion was full of life with tables lined with oversized floral arrangements bursting with lively greens and delicately colorful wildflowers. Sprigs topped off bundles of arrangements adding to the organic luster. Glowing candles and neutral-colored garland hanging from the ceiling completed the earthy ambiance.

Mimicking the antique feel Mady and Brett love, rustic furniture pieces lined the room. From the vintage table with the guestbook to the birch wood teepee overarching the wedding cake, every inch of the room was as unique as the couple that owned the night. Mady recalls the cake display designed by Poppy Lane as one of her favorite parts of the wedding. It complemented the Ann’s Bakery confection that was classic white and adorned with the pair’s initials.

After the newlyweds took in the sight of their reception, they were overcome with how many people were there to celebrate with them. They were so happy to see everyone and immediately went to the dance floor for their first dance to a song by one of their favorite bands, NEEDTOBREATHE.

DJ Jacob Bradshaw, a friend of the couple’s, kept everyone dancing all night long. In addition to celebrating their marriage, Mady and Brett also were celebrating the anniversary of Brett’s parent’s and the birthday of Mady’s father. This made the day even more meaningful to the family-centric couple.

At the close of the night, guests sprinkled the couple with confetti as they exited the mansion to enter a 1965 Ford Mustang. The following day, the couple left Oklahoma for Saint Lucia where they enjoyed the luxurious crystal-clear water situated right near lively jungles. They enjoyed snorkeling and soaking in the offerings of the magical island.

Since saying “I do,” the couple has made their home in Oklahoma City. They often work together on renovating homes and refurbishing furniture with the hope of one day owning a business together. They both agree married life is extremely fulfilling. Mady is thankful for her thoughtful, hard-working husband, but most of all, she loves that Brett is as smitten with her as he was the first time they met. 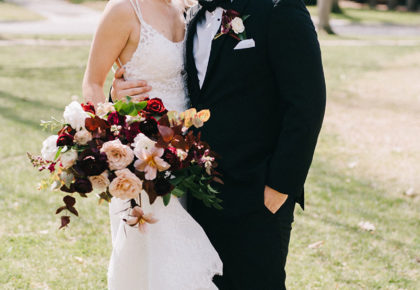 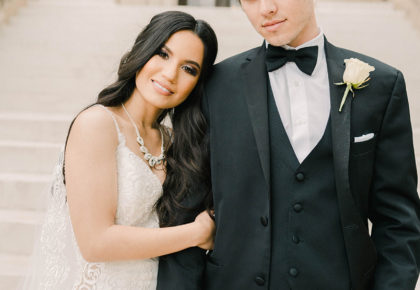 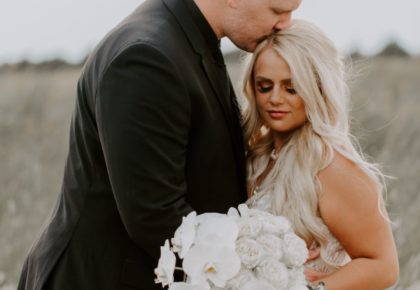