by Brides of Oklahoma July 28 Reeve and Britta met while Britta was serving at Picasso on Paseo. Reeve lived down the street and found himself eating dinner at the local cafe a couple times a week so that he could visit his favorite waitress. Other than an occasional run-in on the town, the two had never met outside the restaurant until one weekend when a mutual friend organized a karaoke night that both Reeve and Britta attended. Reeve’s Morissey rendition impressed Britta so much that they made dinner plans for the following evening, and they were immediately inseparable.

Reeve proposed to Britta on Valentine’s Day of 2015 while in Paris at the remarkable Sainte-Chapelle gothic chapel. Of course, Britta said yes and the two began planning their dream wedding.

Soon after the engagement, the sweet couple found the home of their dreams, a timeless two-story klinker bricked Tudor in Linwood complete with a gorgeous garden that bloomed with roses, peonies, hydrangeas, daisies and five-foot tall Russian sage. While sitting on their deck one day, Britta realized their new backyard rivaled any of the wedding venues she had been visiting. She then turned to Reeve and exclaimed, “Babe! Let’s just get married here!”

With the help of stylist Lindsey Brunk, Britta and Reeve planned a stunning ceremony in the comfort of their own backyard. Choosing white as her base color, Britta selected pops of color found in the garden to create a fresh and clean feel that she would incorporate throughout her big day. They strayed in many ways from convention – the bride wore a vintage blush gown and the groom an indigo suit. Guests were invited to gather for pre-ceremony cocktails under cafe lights while the bride and groom enjoyed a first look and a private toast of their own upstairs overlooking the festivities. The couple walked each other down the aisle to their sweet friend Carly Gwin singing, “Dream A Little Dream Of Me” by the Mamas and the Papas. The ceremony was framed by fresh lavender bushes the bride and groom had planted with their wedding in mind, and after saying “I do” guests tossed fresh lavender in celebration.

The couple mixed and mingled before heading to the after party at Aloft Hotel. Between the ceremony and reception, Britta and Reeve had a chance to sneak away from the crowd, run to their suite and order burgers, which ended up being their favorite memory of the night.

The next morning the happy couple packed their bags and hopped on a plane for their two week Mediterranean honeymoon. 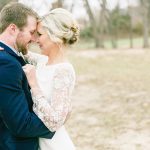 Juneteenth | Reflecting on a History of Black Weddings