Glam white weddings like Shelby and Justin’s gorgeous affair at The Mayo Hotel are simply timeless and we’re absolutely obsessed. From the romantic candlelight to the luxe florals draped amidst the ballroom, every fabulous detail was captured perfectly by Tulsa wedding photographer Picturesque Photos by Amanda and videographer Redeemed Productions. Rentals from Party Pro Rents and a fun photo booth and lighting from Zach Downing Entertainment were the icing on the cake in this dreamy ballroom setting. Cheers to Shelby and Justin!

Many people say that love at first sight is a real thing, but for bride Shelby Snyder it was her parents who saw Justin for the first time and knew he was someone special. Justin Hendrick met the Snyders on an elevator of the historic Mayo Hotel in downtown Tulsa a few years before Shelby even laid eyes on him. The Snyder family has developed, owned and operated the Mayo for more than 15 years, so it was extra special that Shelby and Justin’s love story blossomed there. A few years after meeting Shelby’s parents, Justin and Shelby finally met at a mutual friend’s birthday celebration at The Mayo. From that night on, the couple didn’t leave each other’s side. During their two years of dating, Shelby and Justin spent time with friends and family and watched numerous football, basketball and baseball games. Once Justin fell in love with Shelby’s Chihuahua, she knew that he was a keeper.

Since Shelby and Justin have family from all over the U.S., they spent a lot of time traveling together. In December of 2016, the couple was heading out to Kansas City to visit Justin’s family and had an early Christmas celebration with Shelby’s family before they left. That’s the moment Justin chose to ask Shelby to marry him, in front of her parents, grandparents, sisters and their families. Justin had already received a blessing from both Shelby’s mom and dad, but he admits the proposal was still a bit nerve-racking in front of the large audience. “There was probably a little bit of anxiety there, but her family and I get along so well,” Justin says. “Everyone was joking around and saying that the reason that Shelby and I were getting married was so her dad and I could hang out more often, just because we became best friends over the last couple of years. When I was asking for his blessing for Shelby, for him it was like ‘It’s about time.’” The celebrations continued through the rest of the month and into the New Year.
Choosing the right venues for their upcoming nuptials was a piece of cake, since Shelby had helped plan so many weddings at The Mayo Hotel in the past. The Mayo was obviously a very special place for the couple, making it a no-brainer to host the reception there. “I think it’s such a sweet story that one place could be so important and have so many memories for a couple and family,” Shelby says. “Even Justin’s family too. A lot of their memories in Tulsa have been at The Mayo and I just couldn’t imagine any more of an emotional place for us to have our special day.” It was very important for the couple to get married at a Catholic church since Shelby’s parents and Justin are converting to Catholicism, so they chose the Holy Family Cathedral to say I do. The priest who performed the ceremony was the headmaster at Shelby’s high school and has baptized all of her nieces and nephews, so it was another easy decision to include him on their big day. The couple decided on the month of October for their wedding, the same month as Shelby’s 30th birthday.

Shelby and Justin included several personal touches that made their wedding day even more special. Shelby’s dad had a six-foot steel “H” made to represent the new last name the couple would soon share. The florist Anne-Marie from The French Bouquet filled the “H” with white roses, a flower that accompanied hydrangeas throughout the wedding décor. For their first dance the couple was serenaded to Tim McGraw’s “It’s Your Love,” sang by IJ Ganem – a popular wedding band in Tulsa. Guests enjoyed a surprise confetti ending to their sweet country song.

Shelby and Justin also wanted their family near and far to be part of their big day. Since Justin’s grandfather couldn’t attend the wedding, they made sure to FaceTime him during the rehearsal dinner, ceremony and reception. They also used his wedding gift throughout the weekend, a pair of Tiffany champagne glasses. Justin says having his family together was a big deal, since they hadn’t had a full family reunion in almost 20 years. “It was probably the best day that I’ve had in my life,” Justin says. “It was really special having them there to be a part of the experience and celebration for Shelby and I.” Shelby’s nieces and nephew were the flower girls and ring bearer and the oldest niece was a bridesmaid. Shelby jokes that one of her nieces was eager to eat the cake, so they cut the cake early in the night. “When we cut our cake, we were breaking all the rules and letting our niece eat the cake with her fingers,” Shelby laughs. “It was just so fun.”

It was very important for Shelby and Justin to not see each other before the wedding, and were apart for almost 24 hours before meeting at the end of the aisle. While Shelby says it was a little inconvenient to wait to take photos, it was worth it. “You don’t think you’re ever going to get nervous but then you kind of do get nervous halfway through walking down,” Shelby says. “But I remember telling Justin later, that when I looked in his eyes I wasn’t nervous anymore because it was really technically just the two of us up there. I mean what an amazing and once in a lifetime experience to have in front of everybody. It’s hard to explain.” When Justin did finally see his bride, he was stunned to see her in a dreamy strapless dress that featured lace applique, an illusion back and a long tulle skirt with a soft lace edge. Shelby says the Reem Acra gown, the same designer who made her sister’s dress, was just beautiful. “It just felt right,” she gushed. “Everyone agreed that they loved it and its huge train on the gown. When you put a dress on
like that it’s hard to not feel like a princess.”

Although their wedding day sounds like a perfect dream, Shelby and Justin agree that there were a few surprises along the way. Before the ceremony, one of the groomsmen hurt himself trying to pose for a photo. He seemed fine at first, but eventually passed out later that afternoon and was rushed to the hospital with a broken rib and ruptured spleen. Luckily, he didn’t need surgery and an usher quickly became the hero and stepped in as a groomsman. Shelby’s brother-in-law provided lots of laughter for the entire weekend by coining the term “B-D-E” for best day ever. The hashtag quickly took over social media as the wedding tagline and ended up going viral. The couple says they still receive cards and gifts from people that have the B-D-E hashtag on it. Regardless, the random surprises taught the couple to not sweat the small stuff and enjoy every step of the way. “It’s crazy that one night can keep stories going on for a lifetime, but we had a blast,” Shelby says. “It was more than we could probably ever imagine, it was perfect. I know it sounds cliché, but it’s actually true.” 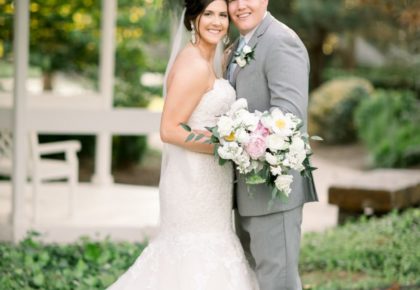 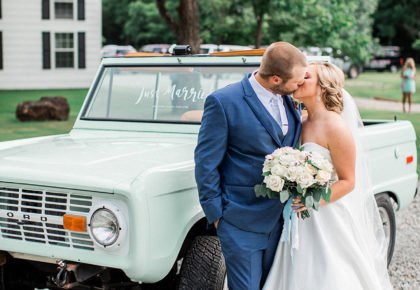